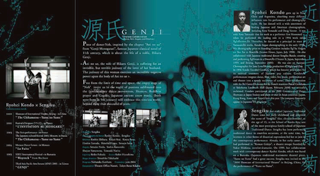 Through dance and music, this piece fuses traditions and the present with justice, embodying the east and the west and hoping to facilitate a better understanding of Japanese culture. The performance at Iceland National Theater will happen next year, 2006, and will be held on the 50th anniversary of the diplomatic relations foundation. In light of the anniversary, the Iceland Embassador Oscarson, and the National Theater Arts Supervisor Tinna Gunnlaugsdóttir have made the invitation.
In Norway, this year the establishment of diplomatic relations has reached 100 years, and to show support of overall culture, the USF Cultural Center Director has chosen us as the first group to be invited.

Above the picture.
Dancers and choreographer, Ryohei Kondo and Sengiku. Four musicians place court music, while six others practice shomyo.
Below the picture.
Dancers and choreographer, Ryohei Kondo and Sengiku. Four musicians place court music, while six others practice shomyo.
“Genji” is one of the celebrations between Iceland and Japan’s 50th year anniversary of diplomatic relations that is taking place at the National Theater.
“Genji” is from a chapter of an eleventh century piece of Japanese literature. “Above the Hollyhocks” is about Hikaru Genji’s wife, his mistress and the jealousy that consumes and ultimately kills her. This ghost prays for salvation and is ultimately freed from this world. This performance is a combination of modern dance, Japanese Imperial Family music, and
Noh, parallel to the other elements of court music, Buddhist scripture, and Buddhist chanting or Shomyo.
 
Appearances are almost all in the open, as there are only two ramps, a curtain, a chair and several boxes. The musicians can be seen sitting in the background. The musicians are wearing dark colored traditional Japanese clothing, while the Shomyo chanters are all older and wearing elegant and brightly colored clothing. Then there are the two dancers, the wife played by Sengiku and the husband played by Ryohei Kondo. They dance in a mixture of traditional and modern dance. The slow, beautiful formational movement of hands and feet are of the wonderful dancer Kondo, whose powerful movements continue until the end of the piece. Sengiku, who plays the sick wife, moves with her head to the floor in small detailed movements. The internal conflict inside of her prevents her movements from becoming anything more. However, as she is caught by jealousy the white clothing she was wearing slowly changes. In its place she wears a transparent grey, and begins to take on the fierce appearance of a demon and begins to take on more threatening movements.
The Shomyo chanters had a big effect on this very interesting performance. Their solos and choruses made the audience feel as if they had gone beyond space and time. To the audience this special display of modern dance combined with a pure and beautiful Japanese art was something that us westerners found easy to love.
“Genji” Bergen Newspaper Critic, 6/12
On the 10th and 11th, the performance of “Genji” at the USF was based around jealousy and agony. This piece was based on a novel written around 1,000 years ago. Genji was not just originally a novel it was also used in classical Japanese theater. The performance was filled with Kagaku (Japan’s traditional Imperial Music), and Shomyo (Buddhist chants), and also Japanese dance and Noh. For the choreography, there were two dancers. Kondo is a contemporary dancer, while the younger Sengiku is a traditional Japanese dancer. The performance took place right in front of Bergen.
The Oldest Novel in the World
Murasaki Shikibu who was a female writer, wrote the worlds first novel, ‘Genji Monogatari’ which was a whopping 54 volumes. A section of that novel was about Hikaru Genji’s lover’s jealousy causing her to change with her emotions into a demon like form. Then in the story she returns to normal.
“Genji” is a famous Noh piece created from the piece “Above the Hollyhocks”.
A Sublime Expression
Kondo as Genji, Sengiku’s dancing as a women, to us it was exotic, but both of their dancing together was very realistic and made it easy for us as viewers to understand the story. The effects of the dramatic lighting on the dance made the expression even more intense. On top of that, the court music and Shomyo made this crossover piece very interesting. This performance was held because of The Japan Foundation and Iceland’s 50th year anniversary. 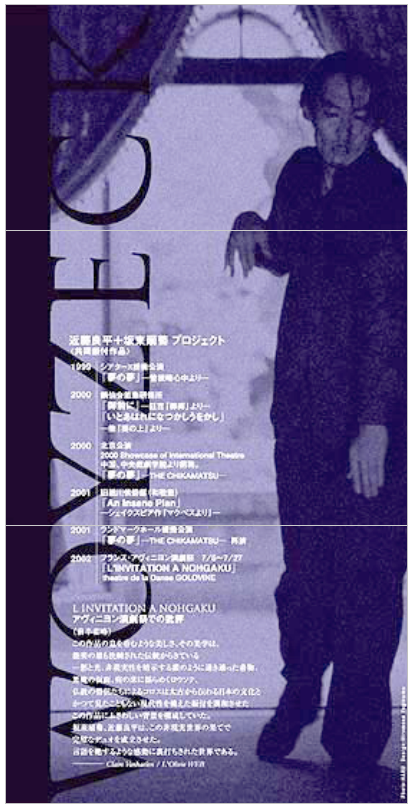 In Buchner’s unfinished drama, “Woyzeck”, many new things come to life. Because of the fragments that have piled up and unfinished due to the death of the writer, it has been re- evaluated as an “ expressionist drama” or “theater of the absurd“, and furthermore it is eternally a modern work.
The story follows a mentally and pathologically hallucinogenic boy, and a sex addicted girl who find their own destinies transposing from a wordless existence into one full of body language in a world full of creations.
   
Artistic creator: Bando Sengiku
Choreography: Ryohei Kondo, Bando Sengiku 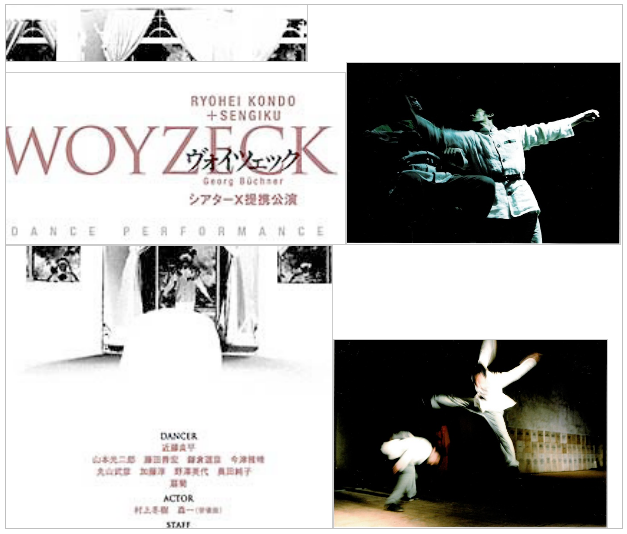 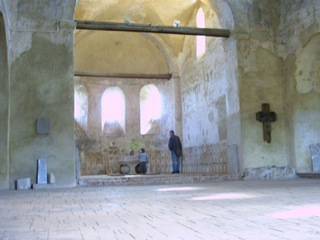 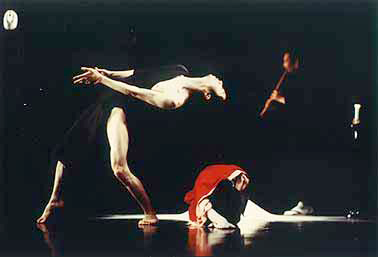 Noh, ‘Nue’’s theme has been reread to “ more than darkness, the dark way is similar to refusing to go” as an extremely abstract thought, with the idea of dance’s polar opposite as the catalyst for this expression.
“Nue” is being accused of that which is buried in uglieness, who plundges into the neverending world of darkness and sadness, covered from modern society is how I want to read it.
Artistic creator, Choreographer: Bando Sengiku
Performer: Makoto Enda Norikazu Maeda Bando Sengiku
Shakuhachi: Eizan Kitamura
    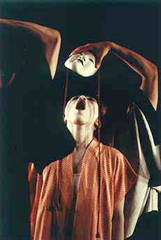 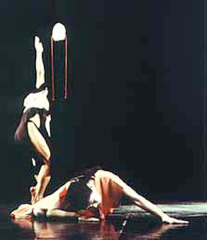 “It is unlucky to be beautiful” Said Hikaku Genji
When they come around a woman, the entire court will shake.
The dynasty that has been on a pedestal will lose control.
You can see 1,000 years of people making the same mistakes. 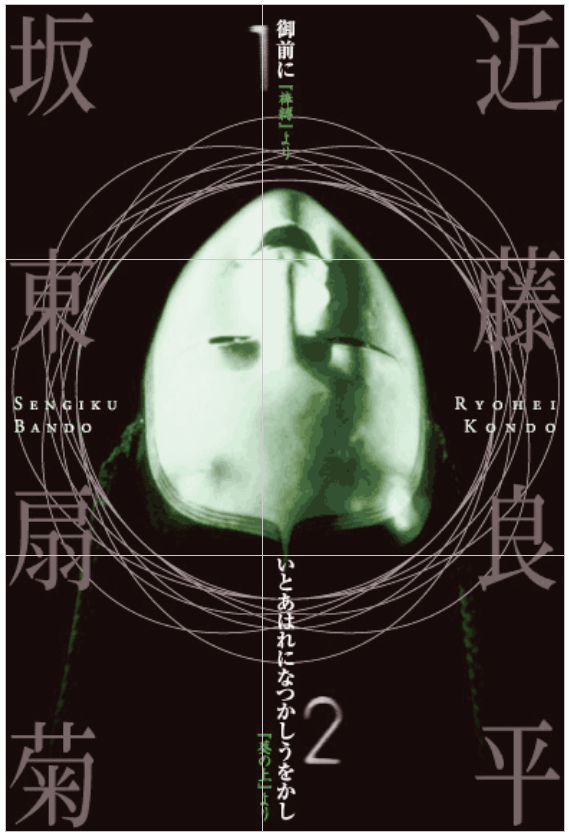 In the year 2000, it will have been 1,000 years since “Genji Monogatari” was first created. Noh’s “Above the Hollyhock” is a piece from the ‘Hollyhock volume’ of “Genji Monogatari” and is shown with the assumption that the audience already knows the story. The protagonist’s jealousy is easily relatable, and appeals to even modern times.
In “Above the Hollyhock” the subject matter is told not through words, and rather uses the viewer’s previous knowledge of the story while exploring in a very free ‘Nohraku’ atmosphere. The subject matter comes to life right before ones eyes, and through Noh’s use of expression, change of tempo throughout the entire piece (opening, middle, climax, and end). With programming similar to a Noh play, from the Kyogen (fake play) to a song, this piece challenges this witty and smart world with dance.

Avignon Theater Festival Review
L’Invitation A Nohgaku (Partially abbreviated)
To smell the beauty of the breath of this piece, it’s aesthetics, is to see the top choice of ‘Nohraku’ that has come from such a long tradition… Shadow and light, a hint of unreality, a transparent kimono that seems as if it were made of mist, the mask of a demon, the flicker of a candle, and the Buddhist priests all have a presence of Japanese culture and also something modern that has never before been seen. There is a harmony in the choreography of the piece with a suitable background.
Bando Sengiku, and Ryohei Kondo make this imaginary world their own in the perfection of their duo.
A world that is impressive and thought provoking world beyond words.
L’Olivie WEB Claire Vanhaelen 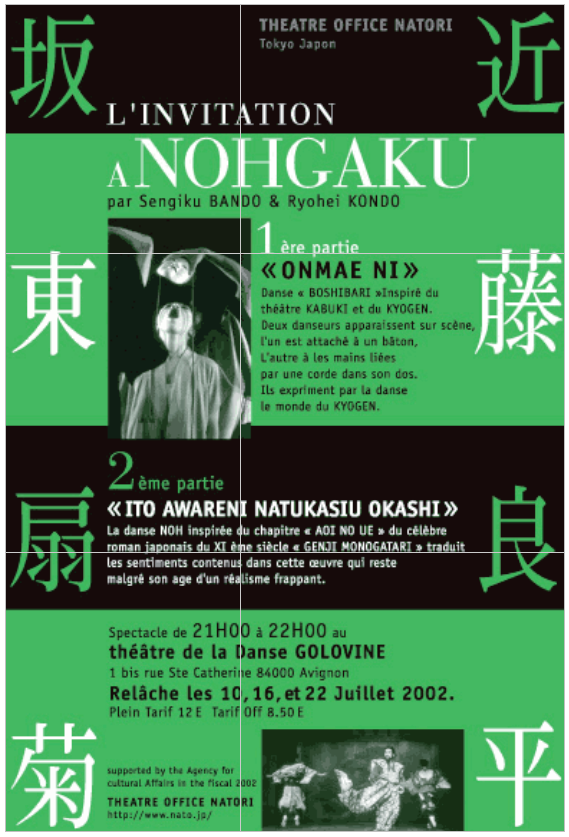